PHP is known to be among the most popular programming languages today – a reason that makes PHP frameworks widely adopted for creating high-demand websites and applications, like eCommerce solutions. Before you hire a dedicated PHP developer to create an eCommerce website, you should know which PHP frameworks are trending, and which one could be the best for you.

Speaking of which, Laravel and Magento are in tough competition for the top spot today in PHP frameworks.

Laravel is amongst the top-rankers in back-end PHP-based web development frameworks on the server-side. This framework is based on the Model View Controller architecture (MVC architecture) which manages data and helps break down the back-end operations into logical components. Laravel is open-source, and is pretty easy to understand as well. Some of the most popular websites that employ Laravel are Disney and The New York Times.

In fact, according to Statistics and Data, Laravel clocked at the highest repository stars in January 2022, beating the competition by eons with a score of 67,902.

Magento, now known as Adobe Commerce ever since it was acquired by Adobe in 2018, is a PHP framework that has been created specifically for the development of eCommerce websites. It is open-source and utilizes the best aspects of Symfony and Laminas. Adobe now powers this PHP framework specifically for eCommerce web application development, making it a straightforward, no-brainer choice for businesses seeking to establish an online shop front. Magento powers the commerce websites for the household brands names, HP and Shoebacca. According to StoreLeads, at present, Magento powers over 158,656 live stores online.

Choosing the Most Suitable PHP Framework

Selecting a PHP framework is more about the requirements and objectives of your business rather than the capabilities of a framework. Each framework – whether Laravel or Magento – is good in its own right; the one that works for you can be decided based on the following comparison. 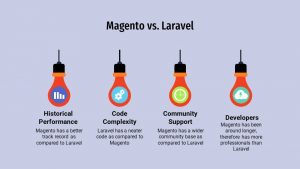 Magento has been known as the most reliable and best PHP framework for website development owing to a plethora of tools it provides to its developers, including plugin compatibility and advanced features.

Laravel, while being a relatively newer framework, has managed to become a developer favorite in the span of a decade because of the simplicity of its code and scalability – two aspects that are driving the modern website development ecosphere. Not surprisingly, according to Google trend reports, “Laravel” as a search term is consistently maintaining higher volume as compared to “Magento”.

Magento, being the older one of the two frameworks, touts a richness in the traditional SQL scripting language – which is what makes it the preferred choice amongst most developers. However, through time it has undergone several overhauls and iterations, resulting in increased code complexity which may prove to be problematic when debugging or troubleshooting.

Laravel, being fairly new to the niche, has stepped in with all the shiny new tools, ditching the old-world SQL for the simpler ORM-based coding on a PHP syntax. It is simple enough to be the more popular choice for developers today.

Both Laravel and Magento are open source frameworks, allowing developers the flexibility they need to leverage a plethora of libraries for augmenting their code. With that said, Laravel is easier to work with here because its code is easier to read, even when changing hands. Magento, on the other hand, houses a more complex code ecosystem which, while being open to libraries, may not make it easy for a developer to troubleshoot if errors occur.

Magento, being a framework with longer years on its back, has a greater number of developers that know how to efficiently use it for developing eCommerce websites. There is no shortage of Magento developers, allowing the companies to hire one at ease.

On the other side, Laravel is relatively new; the number of experienced developers who can use this framework for developing eCommerce websites is relatively low. Businesses, in fact, have gone creative – they hire Magento developers and train them to use Laravel.

Age is again on Magneto’s side where community support is concerned, being the older one of the two frameworks. A wide base of Magento developers support each other with information, use, tips and tricks; open-source libraries have code packages with more niche functionalities tailored for eCommerce use for Magento frameworks.

Laravel is still finding its footing in the coding market, carving its niche for growth. As such, the community support isn’t as big as Magento’s – although it is wide enough to support the developers through most requirements and troubleshooting.

Between Magento and Laravel, Laravel is finding better favor among the developers today because of the following reasons:

Choosing a programming framework is a function of many variables – you can decide which ones to consider and which ones to assume as constants to help you make a better selection between Magento and Laravel as suitable eCommerce web development platforms based on PHP framework. 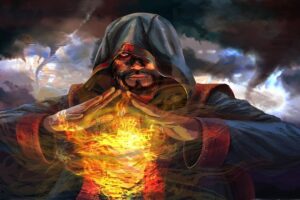